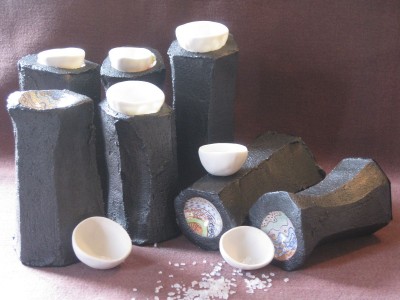 The following was made specifically for The Tasmanian Ceramic Association Annual Exhibition in the Sidespace Gallery.

“Pillars of Salt” is made from BRT with an iron paste surface. The interiors are maiolica with gold lustre. The vessels on the top of the pillars are cool ice porcelain, filled with Persian Blue Salt from Iran.

They flee in despair from ancient lands; their homes destroyed by war, their rich cultural heritage hidden from view, their lives under the shadow of persecution and terror.

They journey across desolate plains or cruel seas or wait under crowded tents.

They cannot look back, but only to the future. They live in hope for a better life, untainted by the tyranny that sent them fleeing.

They are asylum seekers.

I am hoping that my artist statement above requires no further explanation, but when immersed in a body of work, where the imagery appears self evident, it is difficult to look with the eyes of an outsider. 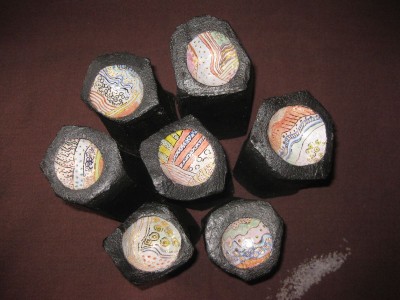 The pillars, black and heavy, rough and uncomfortable, represent the journey that asylum seekers are forced to take.

The interior of each pillar is intricately decorated. I am in awe of the incredible intricately patterned surfaces of Middle Eastern tiles in particular. The artistic traditions of these countries must throb in the hearts of these people, and be imbued in their collective soul. They leave behind the ruins of ancient buildings of intense beauty and archaeological significance that have been destroyed by war.

Atop the pillar, sometimes to the side (the culture is still evident and often celebrated) are the asylum seekers in their purest form, the whole person having survived the journey, fragile yet strong.

The salt is genuine Persian Blue salt , one of the rarest salts in the world, from an ancient salt lake in Iran. It represents the lifeblood, which pulses through the veins, sometimes spilt, the pillar fallen.